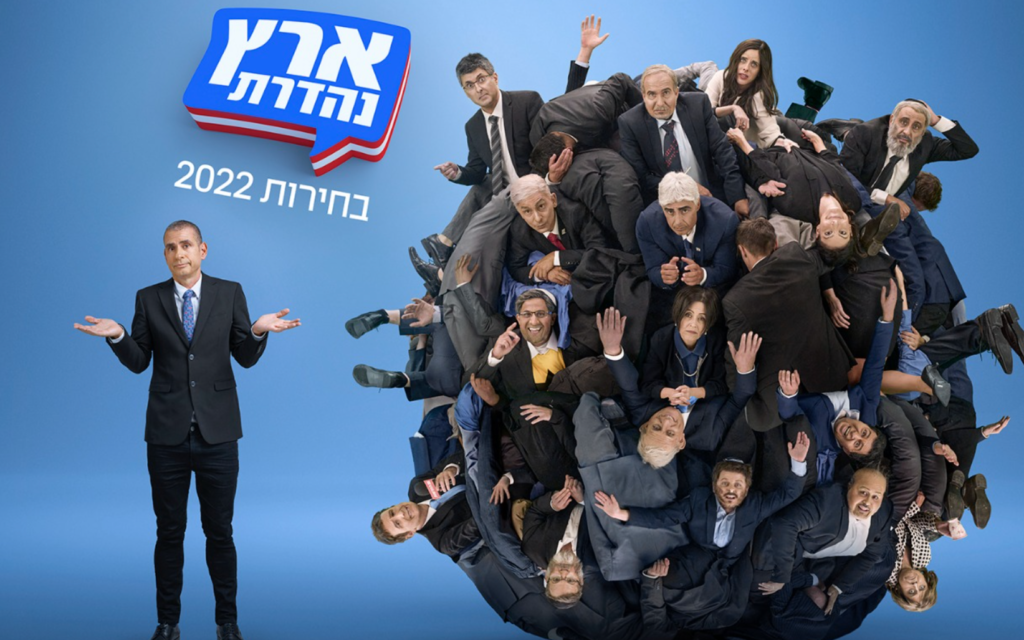 The satirical comedy show “Eretz Nehederet” (“It’s a Wonderful Country”) celebrates 20 years on the air, during which it pushed the boundaries of the country’s most critical issues, holding up a mirror of society Israeli with intelligent and sardonic remarks. parodies of local and global figures and characters.

The weekly scripted show, a mix of “Saturday Night Live” and “The Daily Show”, is one of the most-watched shows on Israeli television. Impersonations of politicians and pop culture figures are at the heart of it, from former Prime Minister Benjamin Netanyahu to Hezbollah’s Hassan Nasrallah.

It’s been a long, laugh-filled ride for the cast and creators who show no signs of retiring from the award-winning show which began airing in 2003 on Keshet’s Channel 2.

Some of the new cast members grew up watching it, like Gaya Be’er Gurevich, who now regularly parodies right-wing politician Bezalel Smotrich and singer Shiri Maimon.

As new faces and names appear on the political map in Israel and the Middle East, actors become their comic doppelgangers, such as Shahar Hasson impersonating far-right politician Itamar Ben Gvir; he implicitly compared him to Nazi dictator Adolf Hitler in a recent song-and-dance number based on the iconic “Springtime for Hitler” number from Mel Brooks’ 1967 film “The Producers.”

Cast members have often said that good satire requires taking sides — either side — then attacking with jokes and comedy.

All the news, from elections to funerals and even terrorist attacks, is fodder for comedy, cast member Shahar Cohen said in a 2010 interview with CNN.

No subject is considered too sensitive. In skit depicting former Prime Minister Netanyahu and former US President Barack Obama, Netanyahu accidentally sets fire to US flag; another parody poked fun at Israeli-Palestinian peace talks like the video game Angry Birds.

The comedy show has always pushed the boundaries of comfort, providing a place for Israelis to laugh at the surreal vagaries of their country and its conflict.

Created by Muli Segev, David Lifshitz and Asaf Shalmon, the series features a familiar cast of Israeli comedians and actors, some of whom have been on the show from the start.

Everyone from Vladimir Putin and Muhammad Abu Tir of Hamas to singer Adele and Dora the Explorer, as well as every possible Israeli politician, are pilloried on the show.

This very Israeli creation of humor and satire is so well known that Abu Tir once complained about his portrayal on the show as a terrorist disguised as a party planner.

Obama joked that any drama between him and Netanyahu was just a ‘plot to create material’ for the show, while writer and podcaster Malcolm Gladwell cited ‘Eretz Nehederet’ as an example of satire good policy.

As the cast reunited at the Keshet Herzliya studio for an upcoming reunion episode, current and former cast members were filmed by Channel 12 news for a lengthy 20th anniversary clip.

Dov Navon (familiar to young viewers as Amnon Titinsky from the popular Kan satire “Kupa Rashit”), and Alma Zak called the show “a startup that became a monster hit”.

Cast members remembered that Orna Banai was part of the series nine months pregnant with her son who was recently drafted into the military.

They talked about complicated makeup sessions that lasted three hours and makeup mishaps that sometimes happened on the show.

Segev, one of the creators and editor, said that the very first meeting between the actors and the creators of the series was between comics with different forms of humor that had not worked together in the past.

“We wanted to create something new,” he said. “We’re all professional cynics, but it’s a bit emotional.”

Israeli elections are approaching Again — this time November 1st. How did the electoral system become so dysfunctional, and what could resolve the repeated deadlocks?

The Times of Israel is proud to present a new limited series podcast, Crippled nation: How Israel’s dysfunctional electoral system can still be fixed. Our political analysts and journalists reach out your questions on the burning issues facing the Israeli electorate today.

Only available to members of the ToI community.

You are a dedicated reader


We’re really glad you read X Articles from The Times of Israel over the past month.

That’s why we started The Times of Israel ten years ago – to provide discerning readers like you with must-read coverage of Israel and the Jewish world.

So now we have a request. Unlike other media, we don’t have a paywall in place. But since the journalism we do is expensive, we invite readers to whom The Times of Israel has become important to support our work by joining The Times of Israel community.

For just $6 a month, you can help support our quality journalism while benefiting from The Times of Israel WITHOUT ADVERTISINGas well as access Exclusive Content only available to members of the Times of Israel community.

Thanks,
David Horovitz, founding editor of The Times of Israel