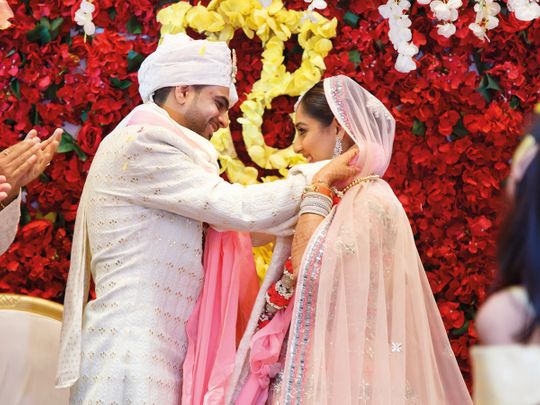 How This Couple Planned an Intimate Family Wedding

Yutika Chawla had wanted a small, intimate wedding, but the man she had grown to love over the past seven years was most insistent on a big, fat Indian wedding.

“Honestly, my husband was the bride,” Yutika said, a chuckle in her voice. “He wanted everything to be big and grand and done properly according to Indian tradition, while I wanted a simple, low-key ceremony.”

Indians Yutika and Chandan’s slow evolution as a couple culminated in a fun, enjoyable and tasteful three-day wedding in July in Dubai, the city where the two were born, educated, found jobs and , along the way, have liked. “We were even born in Al Wasl Hospital, as it was called then,” says Yutika.

Their wedding had its own hashtag – #YutiKaChand – where the two practically documented the countdown to D-Day through regular posts. Scroll down a bit and we get a glimpse of Yutika’s dream moment: Valentine’s Day 2022, when Chandan drove a blindfolded Yutika down a Palm Jumeirah beach, got down on one knee and proposed in wedding.

“Even my marriage wasn’t as special to me as the marriage proposal,” Yutika says, “because it was my first dream. Always. That the person I’m marrying has to propose to me.

Chandan had taken her under the guise of an office party. “But I knew something was wrong. Nobody throws an office party on Valentine’s Day! He had prepared a nice little speech that was very moving; there were candles, then we had a good dinner. It was extremely cold and wearing a short dress was probably the worst decision. But the timing was amazing,” Yutika recalled.

The following months were filled with shopping trips to Mumbai and working with an event planner to sort out venues, themes and décor. “We didn’t have a theme as such, but we followed certain patterns, like bright colors for the first event, a floral theme for the wedding, and lots of bling for the reception,” Yutika explains.

The ceremonies began with the engagement during what according to Hindu wedding rituals is known as the Mata ki Chowki ceremony. Here the couple and their families come together to pray to invoke the blessings of the Hindu Goddess Durga.

The next day’s wedding saw the couple take the ‘Agni ke phere’ which loosely translates to encircling a holy fire (agni), seven times as a Hindu priest takes seven vows on which the marriage is to be built.

On the final day at the reception, held at the Al Habtoor Palace Hotel, the couple along with their friends and family partied the night away, Yutika in her sheer mint green 10kg ballgown that hid her sneakers! “Was I glad I chose to wear sneakers all the time. I had planned to wear them only for the dances,” says Yutika. “The reception was by far the highlight of the whole event, because the place was huge. It was beautiful.”

Yutika and Chandan oversaw all arrangements. “You won’t believe this… I was supposed to get married at 4:30 p.m., but I didn’t go to get ready until 4 p.m.,” Yutika laughed.

The bride was ushered into the wedding hall, under a floral canopy manned by male family members led by her father and brother. “We made sure all the colors were coordinated,” says Yutika. The mandap or wedding scene was densely decorated with red flowers and yet managed to look bright, light and pretty.

A highlight of the wedding was the dances the bride and groom performed in honor of each other and their families. “I had five performances while Chandan had two,” says Yutika. “The last song with the whole family was probably the most special, because my grandmother also joined us! She never dances.

Nice touches included the photo booths set up near the mandap and in the reception hall, where guests could take photos and post them under #YutiKaChand.

After the wedding, the couple is back to work. Yutika works in human resources, while Chandan is an aeronautical engineer. Almost every weekend since the wedding has been a staycation in the United Arab Emirates. “We have known each other for so long; communication is excellent; we share hobbies – reading, shopping and traveling and we have mutual friends,” says Yutika. “We are off to a great start.”

Agenda of the week: 21 things to do in Charlotte this week