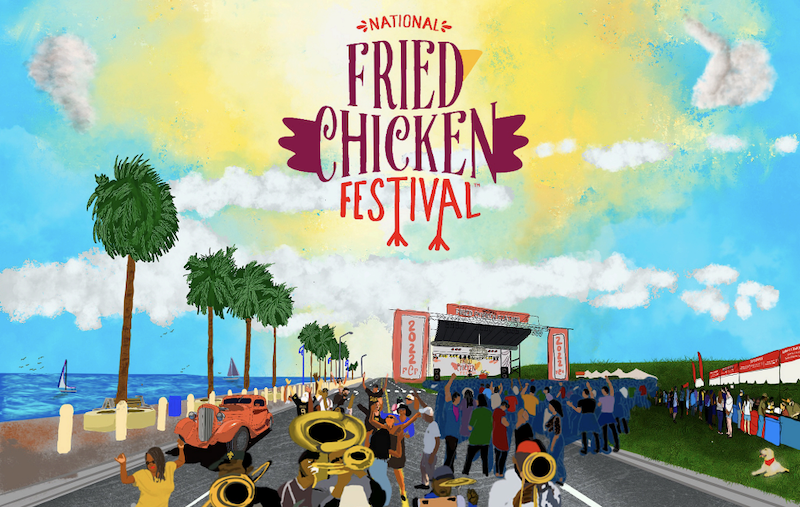 NEW ORLEANS (press release) – At a kick-off press conference on September 16, organizers of the National Fried Chicken Festival October 1-2 presented by Raising Cane’s announced the lineup for the fifth annual event and details for a new partnership with Son of a Saint. The official festival poster by local artist Nesby Phips also debuted.

This year’s festival will feature more than 100 musicians on two music stages: the main stage presented by Raising Cane’s and a second stage presented by New Orleans & Co. The musical lineup includes a diverse range of artists and bands from top performers from across the region including Soul Rebels, Mannie Fresh, Amanda Shaw, Shamarr Allen, Chris Ardoin, PNC, Brassaholics, Flowtribe, Flagboy Giz and many more over the two days.

“This first official poster was inspired by the high energy of the festival mixed with the drive to bring new cultural programming to the lakeside,” said Phips. “Lakeside has been under-organized for a while, and it’s my happy place, so I was very proud to help breathe new life into it.”

The poster will be available for purchase on site the two days of the festival as well as online at friedchickenfestival.com.

Finally, CWF 2022 is proud to announce a new collaboration with its official non-profit partner Son of a Saint, which provides mentorship, education, recreation, camaraderie, cultural enrichment and emotional support to orphaned young men in New Orleans. . Attendees will have multiple opportunities to support the organization’s work at this year’s festival, including purchasing Sonny’s Margarita as their featured cocktail (with every margarita sold, the festival will donate $2 to Son of a Saint ), the ability to donate any drink purchased at any of the various bars, and an opportunity to engage directly with their team at the booth featured in the new Community Corner presented by Capital One.

“Son of a Saint is honored and thrilled to partner with the National Fried Chicken Festival as the primary charitable recipient,” said Bivian “Sonny” Lee III, Founder and CEO of Son of a Saint. “After a two-year hiatus, we are proud to be directly involved in this historic regional event and in such an important way. This opportunity allows Son of a Saint to be seen and engage with our Greater New Orleans community, while raising vital funds for the more than 300 young men we serve. This level of support is critical to our sustainability and continued growth. Thank you to the entire CWF team and organizers, including Son of a Saint Board Member Cleveland Spears.

“As a company and as a festival, we have always placed a high value on diversity, inclusivity and generosity, and every facet of this year’s event shows that,” said Cleveland Spears. , III, CWF organizer and Chairman/CEO of Spears. Band. “From our vendor and entertainment lines to new community partnerships benefiting organizations like Son of a Saint who do great work for our city, we’re expanding our impact more than ever.”

The National Fried Chicken Festival presented by Raising Cane’s is produced by the Spears Group and Festivals for Good.

To see the FCF 2022 entertainment lineup, visit friedchickenfestival.com/entertainment. A full program will be announced in the coming weeks.

Admission to this year’s festival is $15 per day or $20 for a weekend pass. Children 12 and under enter free.