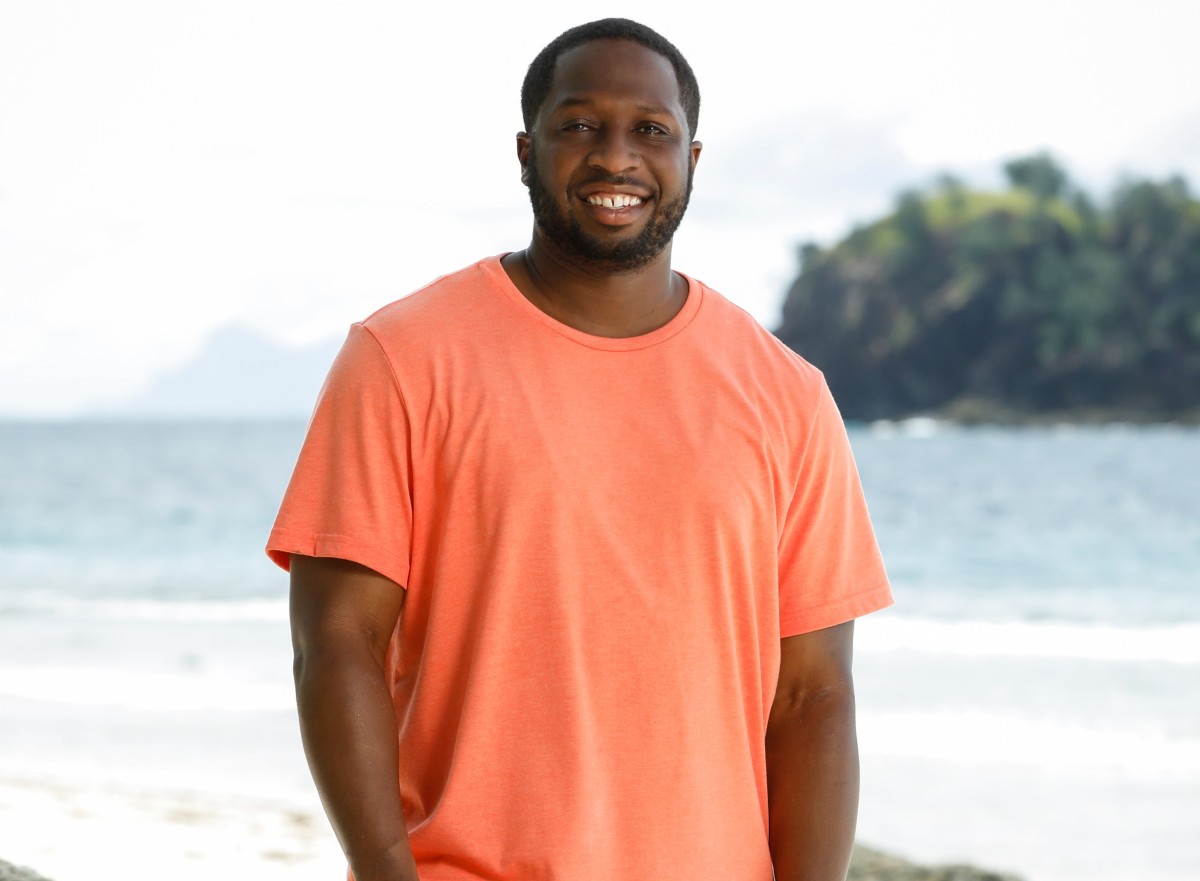 james jones has always known how to adapt, since becoming a fish out of water on a university campus of 13,000 people. And when the 37 year old saw Count Cole to win Survivor in 2007, he realized this was the show for him. The event planner’s guest list for alliances includes deliberately seeking out people who are his opposites, even if it means going against his philly instincts and opening his heart.

Read on for my interview with James, and be sure to check back with Parade.com daily for interviews with this season’s contestants and other goodies. Survivor 43 premieres September 21 with a two-hour special premiering on CBS.

Interview with James of Survivor 43

Why are you here on Survivor?
I really want to use my personal ability to communicate with people. And if I can be as good of a Survivor player that I think I can be, someone who challenges me mentally, physically and emotionally and sees if I can really get things done and really be the best person I can be.

What is your story with Survivor?
So I remember watching the first season. And I really remember watching it when Earl won his season. And I remember watching this season thinking it was masterful how he handled it. He was a genuine person, but at the same time he made people see things his way. And he too being an African-American man. I don’t remember ever seeing an African American man win before Earl. So it was inspiring for me to grow up, to be able to see someone go out and conquer the elements and be able to earn a million dollars to help their family. So I feel like that was my start.

And then, as the game progressed, all the strategy elements regarding the game and interpersonal relationships really got stuck. I grew up playing chess. So you just have to think strategically about how to balance that with dealing with people. And you sit down and think, “How come you got elected with two idols in your pocket?” How do you not see that coming? If I was there, I would do this and that. And now I will have this opportunity. So I always wanted to know what I would really do. Could I really conquer the elements? How am I going to not sleep, not eat? I wanted to challenge myself and think that I could really do this thing. I’m just excited.

Give me one Survivor winner and a non-winner you most identify with.
For my winner, I’d probably stick with Earl. He was very balanced. He never climbed too high; he never went too low. But you can still tell his mind was still working. And I feel like it’s me. I try to keep everything light, good vibes only, to keep a smile on everyone’s face. But deep down I’m like a killer. I think about all the moves and I think about how I can move forward and move the game forward.

And the person who I think didn’t win and who is the best is probably Cirie. She didn’t have the physical tools, and I don’t think I would be a physical player here. But mentally, she’s able to tell when people were making moves and has that EQ to understand and read the room. It’s just amazing to be able to go this far and not be a physical threat, a beast in challenges and not be able to do a lot of things. But being able to use your mind, your mouth and your words to take you far, I think, is masterful. So those are the two people I look up to in the game. And she’s also an African-American woman. So more power to the queen.

What is your favorite moment in Survivor the story?
When Parvati used two idols in heroes versus villains, I thought it was a crazy iconic moment. Because they went to this merger. And just understanding that, using people’s perceptions against you, and manipulating people to the highest level. When you’re down and can still take people out in front of big alliances, I feel like it’s still masterful gameplay. Because it should be easy to eliminate small alliances when merging. And the ability to flip that and shock people when you don’t have the numbers is, I think, the most amazing thing to see in the game.

What do you think is the life experience that most prepared you for the game?
When I was 17, I started school early. I went to college in Florida and am from Philadelphia. So at 17, going to school 1,000 miles away and acclimating myself to a different environment, a campus of about 13,000 people, and being able to adapt to it and thrive. I joined the brotherhood. I was active on campus, getting to know people from across the country, and excelling. I’m able to get to know guys from the south, west, midwest, out of country people you meet, and be able to deal with people and excel socially and have fun , really shaped me and helped me.

Then, professionally, I worked at Goldman Sachs. I worked at Pfizer. I did very good internships. I was around a diverse group of people and figured out how to work with those people. And not “working” the wrong way, but building relationships and being able to communicate with different people at different levels to achieve different goals that I have. These are the things that shaped me. Also, joining a fraternity while I was there. Beta Nu taught me a lot about how to deal with triumph and disaster. Take the ups and downs and always keep a cool head, but keep your mind at the same time.

What excites you most about this new era of Survivor?
My mind is always going 1000 miles per minute. The more stuff you throw in there, the better for me. I look forward to using twists and using what I know to make a difference and hope to have moves that people will use in the future. I want to find idols, make fake idols. I want to make someone believe that they have an advantage that they don’t have. I want someone to think they lost their vote when they got it. If there is anything I can do with the tools given to me, I want to try to push it to the limit. Because that’s life; that’s what this game is about. It’s about pushing your limits – your physical limits, your emotional limits, your spiritual limits – and coming out on top.

How do you think people will perceive you?
This is the ultimate question. I feel like people are really going to see me as a fun-loving person who isn’t too serious at first. And I want them to keep thinking that. I am an old person here. But I don’t think I look old. And I want them to think I’m a laid back stable force. But behind that constant strength, the laughs and the jokes, there’s someone who’s going to slit their throat at Tribal l the second I feel like they’re trying to come at me. So I want to be seen as a stable force, a hard worker who is not going to shake things up. So they want to keep me. But that’s what I want them to see. And that’s what I tried to do. And that’s how I want to introduce myself. Hopefully I’ll be good at it, and can get them out when I can.

What is one thing you told yourself not to do in this game?
I didn’t have this conversation. (Laughs.) I’m not going to be someone different. I have to be myself; I can’t not be myself. Because when everything is stripped from you, you have no choice. And this game takes it all. So I can’t not be who I am. I am a gregarious person. I tell jokes, I have a lot of energy, I have to be that person. And the second I’m not that person anymore, someone will know it’s not me. They will be able to detect it. So we have to tell ourselves. I’m not going to be me. Either take it or leave it. Lots of people like it, and some people don’t. And the people who shouldn’t go! It’s like that.

What is the best advice you received before coming to play?
Actively listen and truly engage with people on a human level. Yes, we play the game. But it’s people, and it’s a game about people. Make sure you are vulnerable and show empathy. Growing up in Philadelphia, you keep everything close to the vest. You keep everything inside. But it’s a game where you have to get people to trust you and do it and be vulnerable.

My friends said to me, “James is okay with showing some emotion. You can’t be so hard to get to know. Don’t have this wall here. It’s the only time in your life you’ve probably need to be vulnerable and let people invest in you like you’re invested in people and that’s how you’re going to win this game.

Which celebrity or fictional character would you like to bring for a visit with your loved ones?
Meagan Good? I do not know. (Laughs). I had a crush on her since I was a kid. So if it’s a celebrity, I can have it. Or actually, no, it would be Diddy. Puffy was literally my idol since I was a kid. Since “I can’t stop, I won’t stop.” If I saw Diddy jump out of the helicopter and he jumped over there, and we had a challenge together, I don’t know what I would do. They may be the only thing better than winning the game.

But I hope to see my niece there. Actually, my mother passed away. It is therefore not possible. But I wish she’d seen me come and play this game, man. That probably would have been the only time I would break down and cry. So I guess it was three people. I tend to talk a lot, as you can see. That’s why they said to me, “Shut up, James! (Laughs.)

Then discover our interview with Survivor 43 candidate Geo Bustamente.

(scroll down to continue reading)