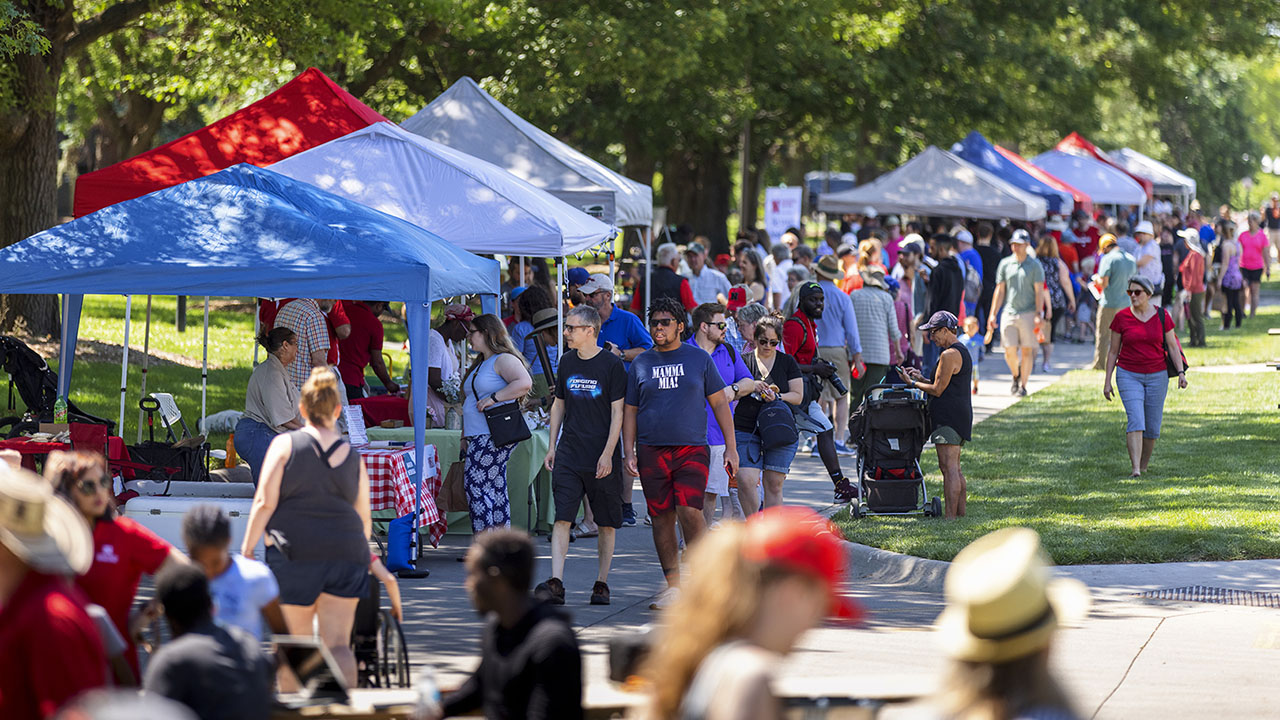 For 150 years, the East Campus of the University of Nebraska-Lincoln has been an agricultural center, the setting for much of Nebraska’s cutting-edge agricultural research, extension, and education.

Over the decades, Lincoln grew around the campus, which began as a working farm surrounded by meadows. Today, East Campus is nestled in a neighborhood that includes homes, businesses, schools, restaurants, cafes and more.

This summer, for the second year, East Campus is working to bring the farming community it serves closer to its neighbors in Lincoln through East Campus Discovery Days and the Farmer’s Market.

“East Campus has always been a place where people naturally come together,” said Jessie Brophy, director of external relations for the Institute of Agriculture and Natural Resources and one of the organizers of Discovery Days events.

East Campus, she pointed out, is home to the ONE Dairy Store, Maxwell Arboretum, and Backyard Farmer Garden, all of which attract visitors from all over Nebraska.

“We want to introduce more people to the beauty of East Campus and give them a taste of the research and discoveries taking place there, while supporting local agriculture,” she said.

Vendors and academic departments will set up kiosks along the East Campus Mall, where campus visitors can shop and learn. Last year, for example, visitors could buy cookies, cheese and fresh produce, among other products; learn more about the inner workings of hives through the Department of Entomology; see a futuristic farm robot at the Department of Biological Systems Engineering exhibit; or plant vegetable seeds at the Department of Agronomy and Horticulture kiosk.

“Backyard Farmer”, a television show jointly produced by Nebraska Extension and Nebraska Public Media, participated in the first year of East Campus Discovery Days in 2021 and returns for the second year.

Last year’s events gave fans of the show the opportunity to meet its host and expert panelists in person, ask questions, and tour the Backyard Farmer Garden. The tours were popular and drew hundreds of “Backyard Farmer” fans, said program host and associate professor Kim Todd.

Todd said she appreciated the opportunity to have a two-way conversation with fans of the program, which celebrates its 70th anniversary this year.

“It’s really just several of us one-on-one, celebrating where we are,” she said.

Todd found that fans also wanted to share their experiences with the “Backyard Farmer” host and panelists.

“We’ll have people coming in, and their mom, grandma, grandpa, loved ones watching ‘Backyard Farmer’ and taking the advice, and now we have two or three generations later doing the same thing,” Todd said. “We want to hear those generational stories.”

In honor of the program’s 70th anniversary, Nebraska Public Media will have a booth with giveaways and a drawing. “Backyard Farmer” also plans a birthday party in the garden, complete with cupcakes.

“Backyard Farmer” is one of approximately 30 Husker programs, departments and other entities participating in East Campus Discovery Days and the 2022 Farmer’s Market. Another, the Loeffel Meat Lab, will sell frozen cuts of beef, pork and of lamb, as well as smoked sausages, jalapeño popper brats, natural casing ground sausages and several varieties of snack sausages, said Calvin Schrock, director of the Loeffel Meat Lab.

The products for sale are made by students studying meat science in Nebraska, Schrock said. Meat is available for sale at the lab from 11 a.m. to 5:30 p.m. on Fridays year-round, and Schrock estimates it has been for about 50 years.

“We have a good number of regulars, but we still have people who probably come every month and say, ‘I’ve lived in Lincoln all my life and my friend just told me about this place,'” said Schrock. . “We would just like to have a little more visibility.”

Todd Schmeeckle from CREW Bean Coffee is one of 16 independent vendors participating in the East Campus Farmer’s Market and Discovery Days, and like Schrock, is looking to find a few new customers.

Schmeeckle has been roasting coffee at home for about five years, starting with small batches first in a cast iron wok and moving to popcorn and then a rotisserie oven before investing in a roaster.

He first roasted coffee for himself, then started sharing with a few friends and supplying coffee to a church and a few other nonprofits to sell for fundraisers. Now he can roast about 10 pounds of organic and free-trade coffee per hour.

Schmeeckle was drawn to the event in part because he graduated from the Nebraska College of Agricultural Sciences and Natural Resources.

“I majored in agricultural economics and spent a lot of time on East Campus,” he said. “I think it has a lot to do with the call.”

And in part, it was just a good fit, he said. Schmeeckle’s business is small but growing. He and his wife have five adopted children and five foster children, many of whom have special needs. It is important for him to spend as much time as possible at home, and CREW Bean helps him do this.

“I thought it would be a good step for me,” Schmeeckle said.

East Campus Discovery Days and Farmer’s Market don’t charge vendors for booth space, making it a great place for businesses considering trying a farmers’ market, Brophy said. In addition to the event’s nearly 50 vendors and activity booths, a rotating cast of popular Lincoln food trucks will offer food for purchase, and different bands will provide live entertainment at each event.