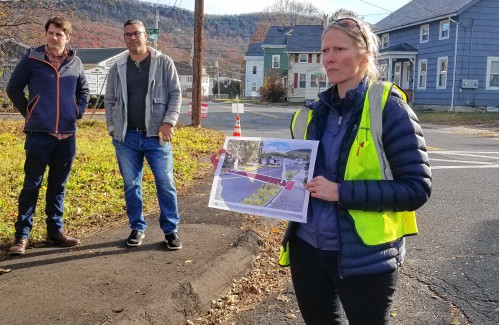 EASTHAMPTON — After getting feedback from residents on infrastructure improvements in the New Town neighborhood, the city is again seeking feedback as it presents its findings and proposed plans at a public meeting on Saturday, May 21.

From 10 a.m. to noon, the Planning Department, Public Works Department and the city’s consultant on the project, engineering firm Fuss & O’Neill of Manchester, Connecticut, will hold a meeting at Parsons Street Park, at Parsons and Federal streets. In case of bad weather, the appointment will be Sunday, May 22.

The meeting will consist of a short presentation followed by a theoretical discussion on the results of the infrastructure and the proposed concepts. It’s an opportunity for residents of the neighborhood – which is bordered by Ferry Street to the north, Parsons Street to the east, Everett Street to the south and Lower Mill Pond to the west – to weigh in, said the assistant planner Jamie Webb.

“We asked for feedback last November and heard from residents. They helped identify the issues in the neighborhood and now we want to hear their input on the solutions we are proposing and prioritize how to move forward,” Webb said.

Throughout the past year, city officials worked with Fuss & O’Neill to assess the neighborhood’s infrastructure and organized a “walk” to tour the area and hear directly from residents.

The New City neighborhood has been identified as in need of comprehensive infrastructure improvements for some time, according to city planner Jeff Bagg.

In addition to the neighborhood’s aging public water, sewer, and drainage systems, roads are in poor condition and access to amenities such as parks or playgrounds is limited.

“Existing public infrastructure is outdated and inefficient, as most utilities were installed around 100 years ago. Aside from some emergency repairs, there have been few improvements since her original construction,” Webb said. “Public water supply, sewage and drainage systems are nearing the end of their intended use. Sidewalks and walking surfaces are limited and, where they exist, are in poor condition and do not meet accessibility standards.

Following Saturday’s meeting, a final report will be presented to City Council.

“In addition to improvement plans for all underground utilities, Fuss & O’Neill has been busy developing concepts, plans and new ideas for the Parsons Street and Lincoln Street parks, addressing safety concerns and for better non-vehicle connections from the neighborhood to the bike path and the rest of the city,” Bagg said.

The final report will provide a roadmap for a series of infrastructure improvement projects to be undertaken over the next decade, Bagg said.

This $175,000 planning project was funded by a portion of an $800,000 community development block grant for fiscal year 2020 from the state Department of Housing and Community Development.

The proposed plans can be viewed on the city’s project webpage at easthamptonma.gov/newcity.

Emily Thurlow can be contacted at ethurlow@gazettenet.com.