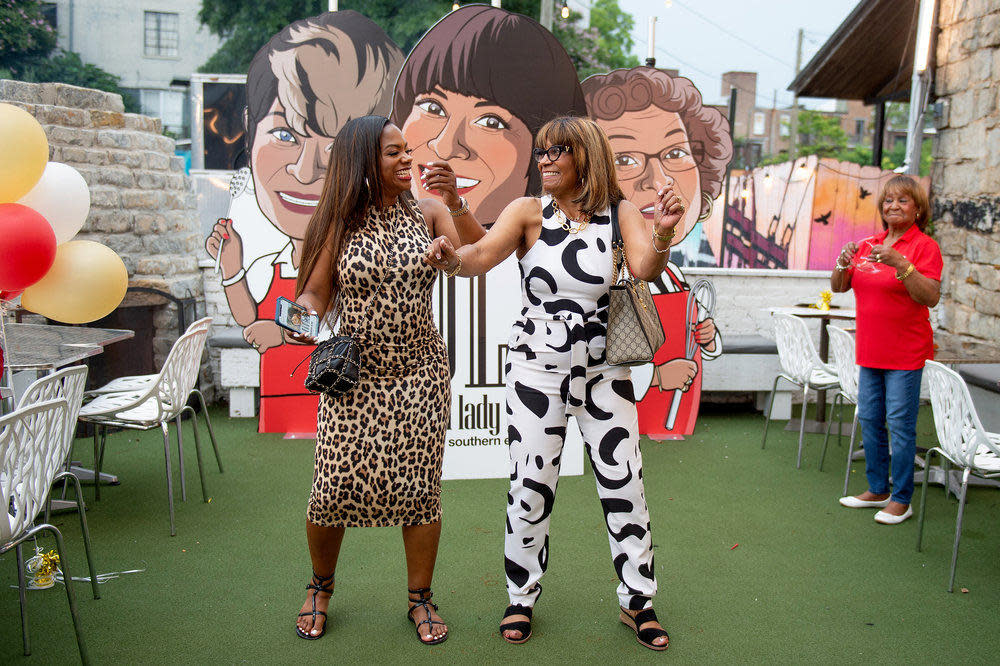 After Watching “Kandi & the Gang,” We Really Had to Help Out the “Old Lady Gang” Crew

If you watched the short story of Kandi Burruss The Real Housewives of Atlanta spin off, Kandi and the gangthen you’re probably dying to visit the restaurant in person and see if the cast’s shenanigans are close to what happens on the show.

I’m here to tell you from first hand experience it is and all for good reason. From the moment you walk through the doors of the South Restaurant on Peters Street in Atlanta, you are entertained.

On the show, viewers are introduced to the colorful and sometimes not the most professional staff of Burruss’ five-year-old company.

The concept for the restaurant was born out of the Burruss family culinary tradition, with mouth-watering generational soul food recipes at the center. The menu has everything you’d expect from a soul food joint: fried chicken, grits, mac and cheese, cornbread, sweet tea, and more. There are also lighter options on the menu for those who don’t want something quite as filling, like lamb chops with salmon and lollipop. All menu items are named after a beloved member of the now famous family, such as Riley’s Shrimp & Grits after Burruss’ eldest daughter, and Aunt Sharon’s Fried Chicken after Burruss’ aunt and one of the three faces of OLG.

On the show, fans got to know the staff and Burruss kept a lot of them, bad reviews and all, because of their loyalty to the company.

There’s Shawndreca the hostess who can run the restaurant with her eyes closed but doesn’t have the best rapport with customers, Dom’Unique the professional bartender/dancer who admittedly takes extended leave to tour with hip hop artists like Rick Ross, Brandon the manager who was filmed kissing his bartender/girlfriend Dom’Unique, Brain the former bartender turned waiter who has his own line of soul food-inspired spring rolls that he promotes and makes people laugh. customers with his wit and wigs, Torrin the event planner, Chef Melvin the kitchen manager/Burruss’ cousin and godson, and Patrick the OLG parking lot manager who is also Burruss’ cousin. Much of the show’s cast was working the day we left off. And like my sister said, it’s great to see that the cast is their real staff doing real work and it’s not contrived for the show.

Unlike the show, we didn’t have to wait in line for three hours. We arrived around 1pm on a Thursday and were immediately seated and placed our order within 10 minutes. The place was packed but there is plenty of room as there is upstairs and downstairs seating in the dining areas. There is no hostess downstairs, however, what I suggest is considered there is an entrance downstairs.

Brandon was one of our contacts, and we were seated and served by Brian to our delight. Without his wig, Brian came with a smile, a bedazzled denim jacket and matching hat, and French tips on his nails. He let us know immediately that the restaurant wouldn’t have deviled fried eggs or salmon bites ready until 1:30pm, which were the two items we spotted. There was also no rosé, which is my personal wine choice. But Brian was great at providing drink options. My sister and friend had the sweet Spike tea, while I opted for the Pinot Grigio.

Luckily they were ready before the scheduled time and we ordered them in addition to the OLG wings. Instead of wings, they served us four whole wings with their special sauce. The sauce was excellent, with hints of hot sauces, spicy seasonings and maybe barbecue sauce.

The salmon bites were also excellent and well seasoned, and the portion was large enough for three of us to share. It was my first time having fried deviled eggs and they were quite tasty although I’m not a fan of bacon bits sprinkled on everything and could have done without. Otherwise, the entrees were worth it, and in fact plentiful.

For entrees, I had the lamb chops with mashed potatoes and collard greens, my sister had the fried chicken and the French toast, while my friend had the salmon with macaroni and cheese and oatmeal. All entrees also come with cornbread. I have to say the lamb chops were some of the best I’ve had and that shocked me as this is a soul food restaurant. Typically, at soul food restaurants, you stick to the basics: mac and cheese and anything fried. But the lamb chops were highly recommended by Brian and were covered in a honey and soy glaze which gave both a sweet and savory flavor. They were tender and meaty which is more than I could ask for.

Brian was attentive, constantly checking on us, making sure we were happy. He was also gracious, told us about his expanding egg roll business (which is now available on Door Dash for everyone in Atlanta), and was kind enough to take photos with anyone who asked.

We also got to catch a glimpse of Chef Melvin, Operations Manager Phillip and the lovely Aunt Nora who was at the hostess stand when we were leaving.

The ambience of the restaurant is welcoming and familiar. It really feels like a home away from home with great food. To be transparent, I expected my visit to go very differently. Google reviews of food and service are mixed. And with the addition of the reality series, I assumed things could have been a bit more chaotic with longer waits and below average food. I was pleasantly surprised to be wrong.

I would definitely go back, and if I lived in Atlanta, OLG would definitely be a regular hangout. My only complaint is that my friend complained that her oatmeal was a bit too salty. The mixed cocktails were also not well received by my sister and my friend. However, these are easy fixes.

Wedding planners reveal mistakes to avoid as a guest