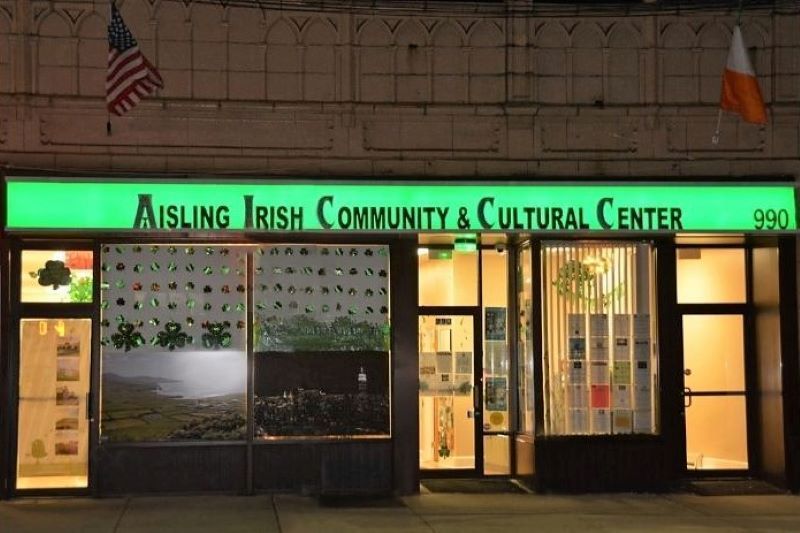 “Twenty-five Years a Growing” would be a fitting title for an opus chronicling the phenomenal growth of the Irish community center Aisling in Yonkers, with Catherine Flood as lead narrator.

A quarter of a century ago, the Aisling Center was established as a convenience store on McLean Avenue in a rented building. It immediately became an oasis of help, hope and hospitality, especially for the victims of the vicissitudes and vagaries of life.

Since then, its growth has been phenomenal as its variety of programs and services has expanded to cover many facets of the cradle-to-grave journey of life. The outreach program’s tentacles have penetrated far into Manhattan, the Bronx, Queens and Rockland, and naturally it has a very significant presence along the Emerald Mile in the heart of the Yonkers Hills.

The fact that the Aisling Center was strong enough a few years ago to purchase its building, thereby ensuring that the center had permanent roots and a secure home on McLean Avenue is indicative of this sustained growth. It was a major achievement, but Aisling’s management didn’t just rest on their laurels.

Since then the building has been enlarged, completely renovated from floor to ceiling and from wall to wall. It’s an impressive transformation, and now the center, in its state-of-the-art building, can continue to serve its ever-growing clientele.

Of course, this didn’t happen by chance, but thanks to great leadership and vision, especially from CEO Sandra Feeney Charles, Board Chair Caitriona Clarke, Director finance and development Sean James and John Cassels, the general contractor. They were greatly helped by a committed board of directors and a generous group of contractors who donated a lot of labor and materials to the building. It was certainly a building built by the community for the community.

Given the phenomenal success of the Aisling Center, there are many reasons to celebrate its 25th anniversary. Such a historic and auspicious event required a high-end party planner, and Catherine Flood was the obvious choice. Catherine has been with the center from the start, occupying all major offices as well as designing and promoting several major and innovative programs. It was ubiquitous at the Aisling center, prompting one observer to note: “There must be at least three.”

For the 25th anniversary of the Aisling Center, she reunited with Seamus Keane, a fitness and health guru from Clann Health, and launched the “6 Weeks to 6K” program. Basically it’s a medley of fun, fitness, and movement-related activities carried out over six weeks, culminating in a 6K, run / walk.

More than 1,500 people have so far registered to participate in the final celebrations which take place over two weekends. Last weekend there were two fun 6 mile run / walk in Central Park in Manhattan and Juniper Valley Park in Queens.

This weekend, the folks of Rockland take off from the GAA Center at 9 a.m. and the Bronx / Yonkers squad begins at 9 a.m. on McLean Avenue on Sunday, October 31 for the last stop of the party.

I hope to see many of you at the start lines and of course even better at the finish lines. I have been told it is not a competitive event, but I cannot stifle the runner’s instinct in me.

So here’s the deal: if you’re of a similar vintage, around seventies, and you get to the finish line before me, either hook or crook, I’ll treat you to a nice breakfast. traditional Irish at Eileen’s Country Kitchen.

Of course, I always pay attention to what my distant cousin Tom said. “You know the boy who’s pretty handy at throwing a soccer ball, ‘If you don’t cheat a little bit, you don’t try.'”

On Friday evening there was a function at the Aisling center. It’s almost ready to open once the furniture arrives, with the dual purpose of greeting the very generous sponsors of the 25th anniversary party, and also as a cheering rally for the upcoming 6 Weeks to 6K Grand Finals. It was very gratifying to hear what the Aisling Center meant to a few people I spoke with.
Johnny Glynn, a current Aisling ambassador, a Galway medalist, a double star with Big Apple hurling and soccer teams, as well as a multi-team assist, said: “Well they got me bought my first apartment and they have my girlfriend Serena her first job. Glad to report that Johnny and Serena should be coming down the aisle soon.

Breda Carroll, one of the founders of the very successful Team Aisling, felt it was the heart of the community, there for everyone, and a great social outlet for many vulnerable people in our society.

Courtney Traynor, another star athlete from New York, spoke about how deeply her late father Phil is attached to the Aisling Center. No truer word was uttered, as the great Gael had donated the flooring to the center of Aisling before his untimely death. Courtney said she and her family were honored to be associated with such a wonderful institution.

Seamus Keane of Clann Health, one of the key players behind the 25th anniversary celebrations, said it was astonishing to see what was possible when a group of hard-working people committed to achieving a common objective. The Aisling Center is a powerful testimony to this feeling.

At this point, the 25th anniversary of the Aisling Center seems destined to be the mother of all holidays – could you expect less with Catherine Flood in charge?

As I have said several times during the years I was with Catherine at the Aisling center, you never need to start a fire under her, but you might need a little pipe. to cool it down a bit from time to time.

Thanks to Catherine’s promotional efforts, donations are pouring in for the big party. These donors were appropriately displayed on a huge banner in the center on Friday, which sparked another new idea in his head. She joked that she would love to curl up with all the donors in a Christmas blanket. A titillating thought, but her husband Dermot might have something to say about such risky behavior.

Either way, it’s a party you can’t miss. You have four opportunities. And while you don’t want to leave the comfort of your sofa, you can help the Aisling Center continue their great work with a traditional birthday card and something in it.

In the interest of full disclosure, I am a relative latecomer or perhaps a blow to Aisling’s center, and currently secretary to the board. Congratulations to the Aisling Center on its Silver Jubilee and wish many years of success to this wonderful community organization. It is definitely a “community built for the community” organization.

* This column first appeared in the October 27 edition of the weekly Irish Voice, sister publication of IrishCentral.